As electric vehicles (EVs) become a larger segment of the North American vehicle fleet, bodyshops and the auto insurance industry must prepare for challenges such as the introduction of complex electronic systems, differences in vehicle construction and safety implications, Mitchell says parent company Enlyte in its recent Annual Trends Report 2022.

The report notes that sales volume of new model mild hybrids (MHEVs), plug-in hybrids (PHEVs) and full battery electric vehicles (BEVs) increased by nearly 75,000 units in the first quarter of 2022, while at the same time the market for new vehicles experienced a decrease of 15%.

The record pace continued in the second quarter, with nearly 200,000 electric cars sold, a 66% year-over-year increase, the report said.

Enlyte notes that as EV sales have increased, their share of recoverable claims has also increased. Between pre-COVID 2019 and year-to-date 2022, the frequency of recoverable estimates nearly doubled, from 0.41% of all written estimates to 0.74%.

Based on data from the National Automobile Dealers Association (NADA), the report breaks down EV sales by region, finding that the western United States continues to lead in both EV adoption and growth. frequency of recoverable claims. 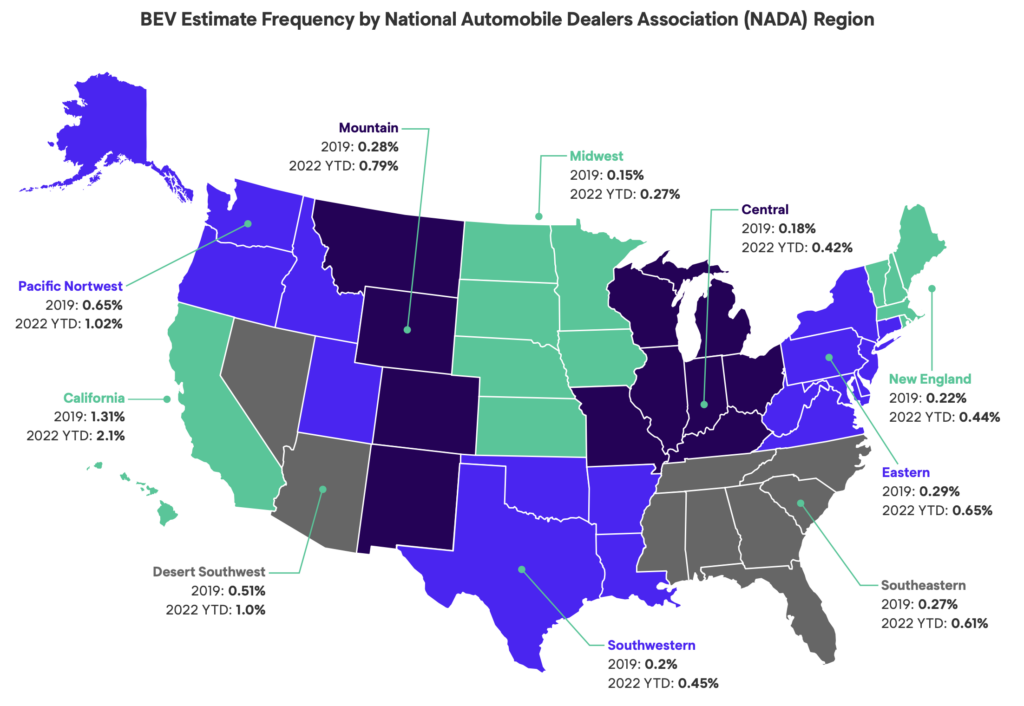 However, in some areas, such as the mountain and eastern regions, the BEV frequency is increasing faster. “This suggests that the trend is expanding across the country, especially as charging infrastructure becomes more prevalent,” the report said. 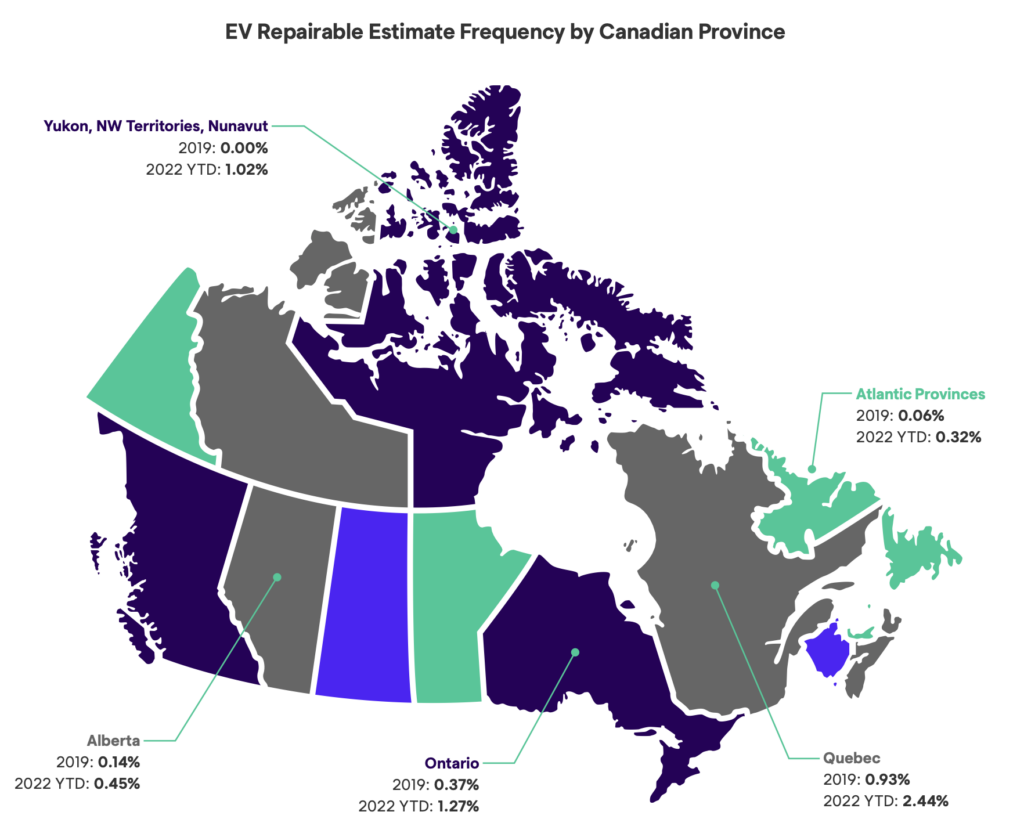 Driving adoption of electric cars has led to rising fuel costs, increased choice of models and manufacturers and a desire for environmentally friendly transportation options, the report said. State and federal initiatives also play a role, such as plans by California to ban gas-powered cars by 2035 (since followed by New York) and the US government’s investment in electric vehicle charging networks. In Canada, the report adds, the Zero Emission Vehicle Infrastructure Program (ZEVIP) is having a similar effect.

Reducing the cost of lithium-ion battery manufacturing will help push EVs to price parity with internal combustion engine (ICE) vehicles, says Enlyte. Despite disruptions in the global supply chain and Russia’s invasion of Ukraine driving up battery production costs for the first time in a decade, EV sales continue to rise, the report said.

The CEOs of both General Motors and Volvo have recently predicted that by 2025 their EVs will be price equivalent to ICE vehicles.

Enlyte notes that Bloomberg New Energy Finance and other sources predict that EVs will make up 3% of all vehicles on U.S. roads by 2025, and nearly 8% by 2030. By comparison, the report notes that Jeep vehicles will account for about 3% of all recoverable claims, and Honda vehicles about 8%, according to Mitchell’s data.

Based on the Canadian government’s projected sales targets, the report adds, Price Waterhouse Coopers predicts that Canada’s fleet will also be 3% electrified by 2025 and that the number will rise to “an astonishing 11%” by 2030 .

The report underscores Mitchell’s previous findings that EVs are much more complex to repair than their ICE counterparts, posing new challenges for bodyshops and insurers.

An example is the relative lack of OEM parts alternatives for EVs, which “results in a greater reliance on auto recyclers for alternative parts.” Another is a greater reliance on lightweight materials in electric car construction as manufacturers work to offset the weight of the high voltage battery pack. Lightweight materials such as aluminum, carbon fiber and composites offer fewer repair options than mild steel, the report said. 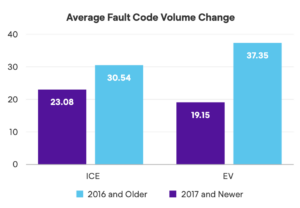 Vehicle complexity affects safety, says Enlyte. Mitchell Diagnostics scan results reveal nearly twice as many trouble codes for BEVs compared to ICE vehicles, as well as a jump in the number of trouble codes per vehicle. According to the report, 2017 and newer model year vehicles had a 95% increase in fault codes per scan, versus a 23% increase for all vehicles of the same model year.

The high-voltage batteries of electric cars pose a significant hazard to repairers, a major contributor to the 12 additional repair lines per estimate compared to ICE vehicles, Enlyte said.

The “corrosive and potentially explosive high-voltage” battery pack must be properly managed during repairs to protect workers, the report says, with specific precautions needed from the moment the vehicle arrives at the shop. It notes that I-CAR has dedicated an entire section of its website to EV repair and has made available a range of training materials and resources to support repair professionals.

In addition, because many OEMs specify maximum temperatures for their vehicles’ batteries, the pack often needs to be removed from the vehicle and safely insulated before the vehicle undergoes a paint booth bake cycle, the report said.

“As adoption of electric vehicles continues to grow, auto insurers and refinishers will need to prepare,” the report advises. “That preparation should include having the right tools, training and understanding how EVs impact claims processes and costs. It should also include an evaluation of the technological solutions used to support collision damage assessment.”

Differences in powertrain and parts between EVs and ICE vehicles “can affect the accuracy of estimates, the efficiency of the appraiser and even the correct repair, especially when EV-specific parts and categories are replaced by ICE alternatives,” said the report. “To account for these differences, rating solutions need to be tailored to EVs with the addition of EV types, component categories, data organization, and standard definitions for battery capacity and engine size. Having such features can help streamline the assessment process and get the growing number of electric vehicles – and their owners – back on the road safely and cost-effectively after a collision.”

Mitchell announced earlier this year that it will release enhancements to its Cloud Estimating platform that he says can simplify the collision damage assessment process for EVs and account for the design differences between EVs and ICE vehicles.